In lieu of their original translation final, my upper level Latin students unanimously agreed that they would prefer to work toward creating a commentary on Book 2 of the Confessions. To that end, each student has been assigned a ca. 435 word chunk of the text to work on. Our primary goals will be to address difficulties that an intermediate level Latin student might have with the Latin vocabulary and grammar. We should be able to work through the entire text in the time remaining during the semester, so the students will be able to draw from our in class discussions and translations as they prepare their section of the commentary.

While they're working on their sections, I'll be looking at the best way to compile and then publish our final result as an open access document.

Goal: Produce a grammatical commentary geared toward intermediate Latin students. First and foremost such a commentary should assist with grammatical constructions, clarify in cases of complex word order, and indicate nuances of the non-classical Latin vocabulary. To meet these needs the commentary should provide individual entries on phrases and words in the text that provide basic definitions and form identifications for individual words, and identifications of grammatical constructions with reference to a standard grammar text. In cases of complex word order, clarification by sentence diagramming or re-ordering the Latin in a more familiar English word order may be desirable.

Of secondary importance in creating our commentary may be to provide descriptive headings for sections of the text. Additionally, notes addressing aspects of relevant (late) Roman culture would be a welcome addition to provide the reader, familiar with classical Latin authors such as Cicero and Caesar, with a point of reference to place Augustine within his cultural context as a Roman living in 4-5th century CE North Africa.

Resources: Please make use of the Lewis & Short Latin Dictionary. It is available on the Perseus Project and is used in the SPQR app. Likewise for grammar commentary, use Allen & Greenough’s New Latin Grammar. This is also on the Perseus Project and in SPQR; it is also the grammar that was available at the University Bookstore for this course. For non-classical Latin constructions Nunn’s An Introduction to Ecclesiastical Latin may be of assistance. It is freely available on archive.org.

Format: Please limit your use of formatting in typing up your commentary. Plain text would be ideal. In addition, organize your entries in the following fashion:


Example from the beginning of Book 2 of Augustine’s Confessions (2.1.1):

We have just started working on Book 2 of Augustine’s Confessions in my upper level Latin prose course. My choice of this text was sort of the result of a perfect storm last spring. I was teaching a course, Intellectual Traditions II – Medieval to Renaissance, for the Honors Program here at the U and the Confessions was one of our common texts. I also had a student in my second year Latin poetry class who was interested in working on Augustine.
We’re just a week into the text, but it is one of the best things I have read in Latin in quite a while. I'd read bits and pieces of Augustine over the years, but I'd never really sat down and worked through a big chunk like this. His language is viscerally descriptive and his style is clear and straightforward. The biggest difficulty for my students, and myself too, is the vocabulary. We spent the first ten weeks of the semester reading Cicero's Pro Caelio. Augustine uses words that often seem familiar at first glance, from English derivatives, but they are Latin words that aren't encountered in Cicero or have unexpected nuances. It's a great read for someone who likes to pour through dictionaries, because the definition one needs is often near the bottom of the entry.
The real draw back to reading the Confessions with undergraduates, who have essentially studied only Latin texts from the late first century B.C.E., is that there is not a good student commentary. O’Donnell's text and commentary is great for tying the text into the traditions of early Christianity and the philosophical context, as is Gillian Clark's Cambridge edition, but they aren't of much assistance to a student who is still mastering grammar and dealing with the overload of new vocabulary and idiom. So over the weekend I started thinking about what a good student commentary would consist of, and today I proposed to my students that we could develop a commentary on Book 2 for students like themselves.
We did a little brain storming in class about what a good commentary should look like. I took in half a dozen commentaries of various sorts and had my students flip through them and identify the things they liked and didn't like. Perhaps not surprisingly they were very much in favor of those texts that included a bit of Latin, vocabulary notes, and grammar explanations in separate sections on facing pages, like Cerutti's Pro Archia (2006) published by Bolchazy-Carducci or Steadman's self-published Plato's Symposium (2009). Besides the obvious convenience of this layout, one student pointed out that since there is relatively little Latin text on each page it makes you feel like you’re really making progress on the text. They were also in favor of diagrams of complex sentences. Specifically for Augustine we agreed that it would be nice to have a vocabulary that included definitions that would be appropriate for the specific context of the confessions, but also include a follow up of basic or classical definitions that one might have encountered, or will, in reading other texts as they continue their studies. We're working largely from O’Donnell’s commentary via stoa.org and we also decided we’d like to have more on the Roman side of things in terms of cultural content. These are students who are not exposed much to material from the later Roman Empire due both to the research interests and scholarly strengths of the faculty and also the design of our curriculum. So some contextual essays would also be helpful.


I left them to ponder this ideal commentary until our meeting on Wednesday. I offered to substitute working toward creating such a commentary for their planned translation final. In addition, I suggested that we could do this work with the aim of publishing an open access student commentary on Book 2 of the Confessions, with all contributors getting publication credit to add to their CV. I really like this idea for a number of reasons. First and foremost it will get them working with their dictionaries and grammars and then making the hard choices about meanings of words and types of constructions. Depending on how we break down the work, they will also have the chance to think and write about the cultural context of the text.
Posted by A.M. Christensen at 2:09 PM No comments: 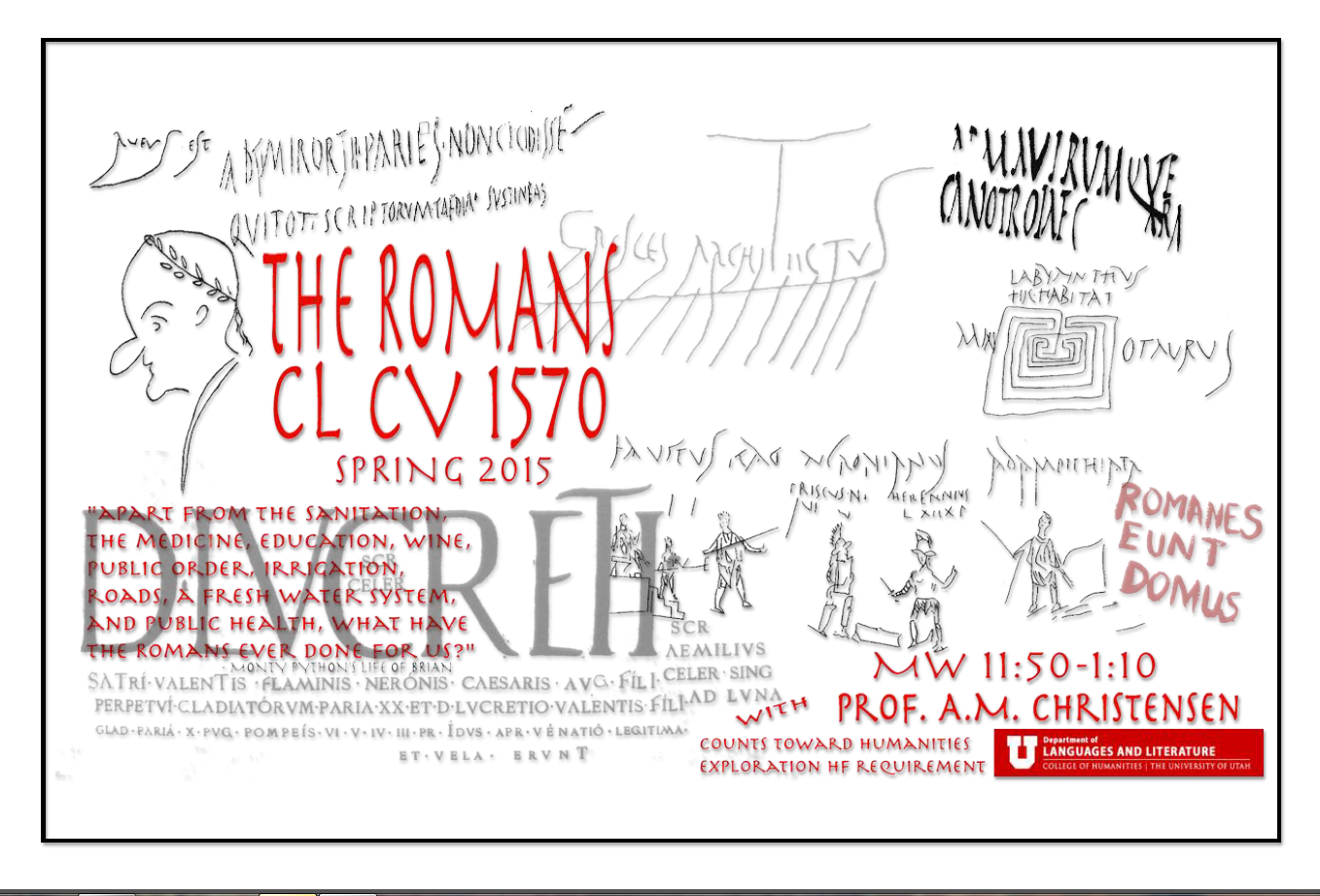 In this course we will explore Roman culture from its legendary beginnings in the seven hills of Rome, through its expansion across the Mediterranean and Europe, to the rise the Roman Empire. Roman cultural studies rely on a multidisciplinary approach, including the fields of archaeology, philology and history. As students, you will acquire and develop the basic tools used to interpret the preserved textual and artifactual evidence of the Roman civilization.  We will discuss many aspects of Roman society, including politics and the military, religion and mythology, production and trade, sport and leisure, & art and literature, as we examine the daily life of ancient Romans.

Send me an e-mail at alexis DOT christensen AT utah DOT edu.

These graffiti & public notices from Pompeii date to the mid-first century A.D., with the exception of #6. It features in Monty Python’s 1978 comedy, The Life of Brian. 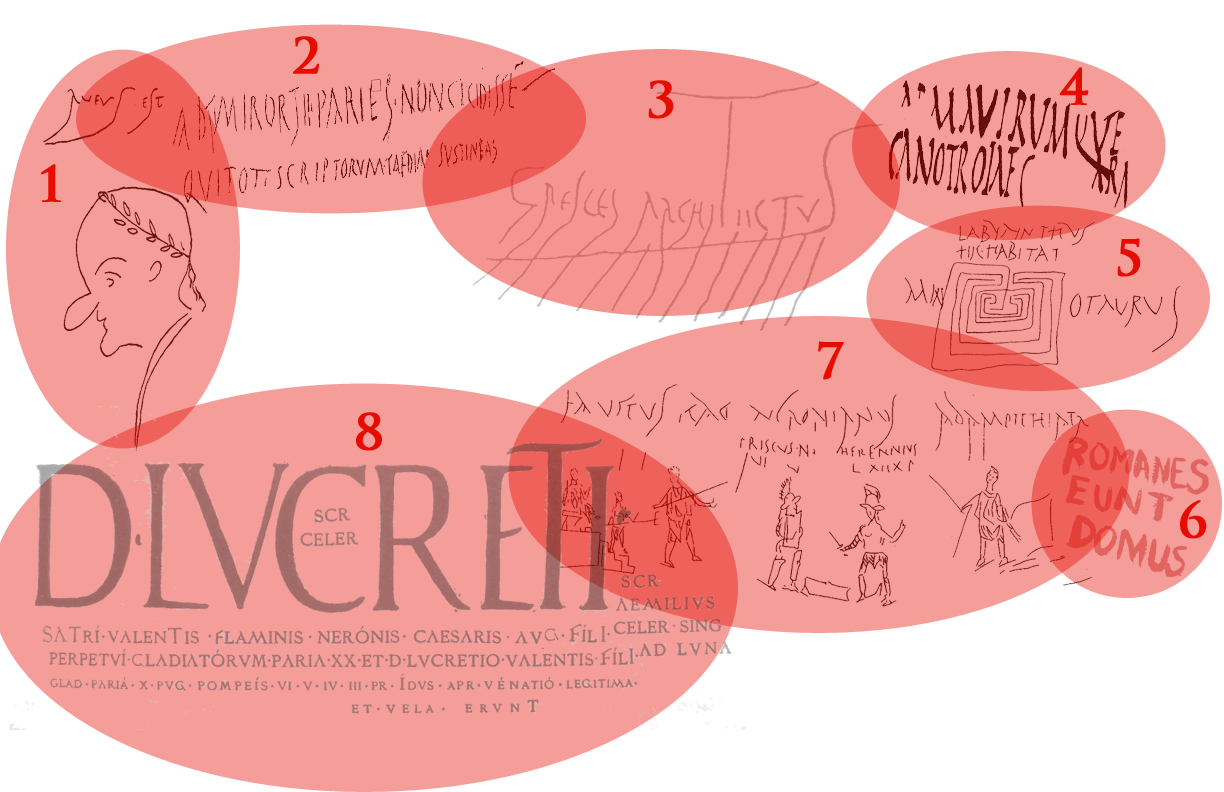 Location of These Graffiti & Public Notices in Pompeii

Posted by A.M. Christensen at 9:33 PM No comments:

Want to Buy an Italian SIM Card for Your Phone? Or, How to Get a Codice Fiscale.

How to get an Italian codice fiscale from the USA. Since this took me some time to figure out, I figured I would share. "Why might one need a codice fiscale?," you may be asking yourself. I've gone 20+ years of summers in Italy without one. But if you want to buy an Italian SIM card for your unlocked smart phone  or even a pay-as-you-go, not-so-smart-phone nowadays (or perhaps a quaint Tuscan farmhouse which you plan on gifting to me), you'll need one.

The process is pretty simple and I received my codice via e-mail in about two weeks. I still haven't received a physical card as those seem to be sent from Italy to your embassy and then on to you.

1) Find your Italian Consulate, based on your state of residence, on the list here.

2) On your consulate website, and they all seem to be a tiny bit different, look for the "Modulistica" link or change the language to English and look for "Forms." Then find the link for the codice fiscale form.

It seems each consulate has a slightly different form, but all asking for the same info. My consulate is in San Francisco and they kindly include instructions in both Italian and English. The link to the form for the SF office is here in case you'd like some decent instructions and your consulate isn't quite as thorough. I don't know if it matters whether you fill out your consulate's specific form, but some do have their location listed in the form title. SF doesn't.

3) Follow the instructions to fill out the form and send it, a copy of your passport, and a self-addressed stamped envelope to your consulate. Wait ca. two weeks for them to email your codice to you. They will ultimately send you a card in the mail, but you just need the number apparently, (just as we Americans don't need to run around with our social security cards, we just need to know the number).

If you're already in Italy and would like to get a codice you can visit an Agenzia delle Entrate. I would recommend asking at your hotel for the nearest location or you can use this on-line form. (n.b. once you click through the "Find the Office" link it is in Italian. Comune di residenza = municipality. Indirizzo di partenza = street address. You may want to click the button for Ufficio più vicino all'indirizzo di partenza, which will provide locations physically closer to the address you have entered rather than use the default location for your comune.)

Heads up: There are also various websites that will calculate your codice for you. THIS DOES NOT CREATE A VALID CODICE FISCALE. I compared my real codice to those created by these on-line calculators and they were off by two characters. I don't know what, if anything, happens if you're found to be using an invalid codice, but personally I'm a bit paranoid about these things and prefer not to find out. If you decided you want to try one of these calculators to get an invalid codice, Italy Chronicles has a thorough explanation of how to go about this.
Posted by A.M. Christensen at 8:44 AM No comments:

I find myself repeatedly posting new links in a variety of places as coverage of the new Sappho fragment continues, so I am going to simplify my life and collect them here. I'm actually teaching Sappho next week in my Women in Ancient Greece and Rome course, and we just did Catullus 51 in my second year Latin poetry course, so this is all quite timely.