Posted by A.M. Christensen at 7:29 PM No comments:

It's hard to believe that we are already looking ahead to the 2013 spring semester; it seems like we just got started on the fall semester! But the registrar has published the course offerings and next month students will start registering for classes and faculty will start ordering textbooks. 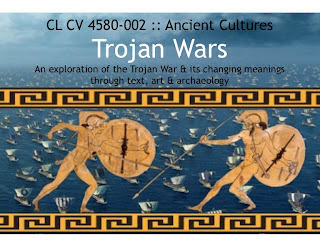 I had a relatively late change to my teaching schedule for spring 2013, but it's one I am very psyched about. I'll be teaching an upper level course on the Trojan War. This sort of course is not uncommon in classics programs and it's one I have wanted to teach for a while. I get the chance to do bits and pieces of Trojan War related myth in lit and myth courses and I always drag the excavations at Hissarlik and Mycenae out in my Greek civ courses, but now I get to spend an entire semester exploring the meanings and motifs of the Trojan War!! The trouble will be deciding exactly what I can reasonably fit in and what I will have to let go.

I'll also be teaching Roman civ and second semester classical Greek. I'm looking forward to both classes just as much as the Trojan Wars classes; it just has that "new toy" thrill at the moment!!
Posted by A.M. Christensen at 7:04 PM No comments:

I'm relatively new to Twitter. I signed up for an account about a year ago in conjunction with my other blog on amphitheatrical and gladiatorial stuff, Amphitheatrum ad Infinitum. At the time I was rather short sighted and chose @amphinitum as my Twitter handle. I found that there are a bunch of great classics folks out there in the Twittersphere and I've learned a lot from them. (Liz Gloyn has compiled a list of "Classicist Women on Twitter" over on her blog Classically Inclined; anyone know of any other compilations out there?) I largely use Twitter to keep up with research and academic stuff, but I do have a few friends and family members who use Twitter and it's a nice way to keep up with them too.


I found that the was a lot of "news" worthy stuff on Twitter related to topics that I teach and decided that incorporating Twitter into my classes might be a nice way to introduce students to wider classics networks, public reception of classics stuff, and promote continued dialogue on course related material outside of class. I've also found that using Twitter has made me more conscious of my writing. Cramming what you want to say into 140 characters and maintaining coherency and some semblance of nuance requires some real thought sometimes!

So I signed up for another Twitter account as @ProfChristensen, generated some hash tags for my spring 2012 courses, and away I went! Except my students didn't really follow. I had a small number of students who actively used Twitter already and they came along, I had a few more who had Twitter accounts, but hadn't used them in months, and they signed on too. But by and large my first experiment with Twitter was a not a resounding success. I have no doubt that it failed because I did not require all of my students to engage. I didn't and still don't want to incorporate Twitter into my graded assignment structure, so I don't really feel the need to make Twitter a course requirement at this point. This is not to say that Twitter can't work wonderfully inside and outside of the classroom and I've seen a number of examples of this (check out Prof Hacker for some examples like this one in a Shakespeare course).

I have not however given up on Twitter and the classroom. Instead this fall I am continuing to tweet class related tidbits and I have picked up a few followers. But I have also started collecting my tweets with Storify and have posted the links to these collections on my course web pages, so non-Tweeps can access them as well. So we'll see how it goes this semester!

If you want to see what I'm tweeting about feel free to check out my course hash tags on Twitter or the collected versions at Storify.com.

My ancient sports course tweets can be found with #CLCV2780

My classical myth tweets via #CLCV1550

My upper level Latin courses, in which we are reading Augustus' Res Gestae and Suetonius' Divus Augustus, get their tweets via #LATIN4610