Gladiators & Politic(ian)s (or, Why I Started This Blog)

I've been toying with the idea of developing a course on the cultural history of the Colosseum for several years now. I'd cover the usual amphitheater and gladiator topics from the "origins" of the games, through the building of the Colosseum, and the spread of amphitheater culture throughout the . But I'd also dedicate a large chunk of the course to the cultural reception and appropriation of the Colosseum, and gladiators, from antiquity to modern times. Having pondered this idea for almost four years, gathering references here and there, I decided to commit to the idea and make a more concerted effort to developing the course, so that I'd be ready to propose it and teach it when the opportunity arose. And so, last fall, I started Amphitheatrum ad Infinitum. It's been a beginning filled with fits and starts, but now that the academic year is drawing to a close, I am hoping to develop a blogging habit and go somewhere with this course concept.

I started thinking about this Colosseum course four years ago, when we were in the midst of primary elections and political debates. I woke up one morning in February to a rehashing of the Obama-Clinton debate in , on NPR. Tom Ashbrook of On Point was getting a local take on the February 26th debate staged at 's from Mike McIntyre, a columnist for the Cleveland Plain Dealer. The thing that struck me was the way in which Ashbrook and McIntyre identified the debate as a "spectacle" comparable to a fight or a gladiator match. Here's the most relevant part of the analysis:

Ashbrook: "What was the sense in the hall? How did Ohioans respond?"
McIntyre: "... When it actually rolls into your town it just has a bigger spectacle, you know. Some of the folks that were following the campaign were rolling their eyes, like "here we go again," "we've heard all this before."..."
Ashbrook: "Did you have a sense, or was there a sense in the hall of who came out on top? It's neck and neck in . I don't know where it stands in in the polls right now. Was there a sense of a winner, of two gladiators who have been at it, both admired for sticking at it? How did you read the response in that microcosm Mike?
McIntyre: "What's interesting about the Wolstein Center at Cleveland State University where this debate was held, is that it is a place where there have been boxing matches, big time wrestling spectacles, there was even something called the "King of the Cage" match, where a kick in the teeth really is a kick in the teeth. And so it was a perfect site for this kind of a debate. I think it, I think people did see it as a couple of people who are really battling for it. In the end I don't think any opinions were changed, I don't think any minds were made up, based on last night's debate.  But I think people really did, they behaved themselves and didn't cheer on television as they were admonished not to, but I think that people really did think that their candidate represented themselves well, whichever side of the aisle they were on." [You can hear the whole broadcast here.]
The positive identification of Obama and Clinton as gladiators and the suggested parallel between the debate and the other combat sporting events that have been staged at the illustrate an interesting cultural appropriation of the arena. The image of the gladiator has become a popular one in our modern culture. The gladiator has come to represent the underdog who overthrows the forces of oppression. A hero who will fight to the death for his beliefs or for his "team." This is easily seen in films like Spartacus or Gladiator or in the innumerable identifications of football players as "gridiron gladiators."
While ancient gladiators had a certain celebrity, they were largely considered disreputable (infames), like prostitutes and others who made a living by "selling" their bodies, and were most frequently slaves. And a Roman citizen most assuredly would not identify with a gladiator. In fact, we can see gladiator being used as a slur against one's political opponents in ancient . Perhaps the best of examples of this come from 's defense of Publius Sestius in 56 B.C.E. against charges of using violence for political gain (de vis). 's nemesis, Publius Clodius Pulcher (and probably his brother, Appius Claudius Pulcher), was almost certainly behind the charges brought against Sestius. As the last to speak in Sestius' defense, does not need to deal the charges or the facts of the trial. Instead he sets out to demonstrate that Sestius was the sort of man who had only the best interests of the republic at heart and to attack those who are wrongly prosecuting him, namely Clodius. repeatedly refers to Clodius as a gladiator, accusing him of using untrained gladiators to compel political support in the forum by means of violence and bloodshed. 's identification of Clodius with gladiators is clearly antithetical to Ashbrook and McIntyre's identification of Obama and Clinton. [You can read a translation of Cicero's Pro Sestio here. The gladiator references pick up in section 77.]
We are now in the midst of the campaign season, again, and I was quite thrilled to see this on the cover of the February 6th issue of Newsweek. 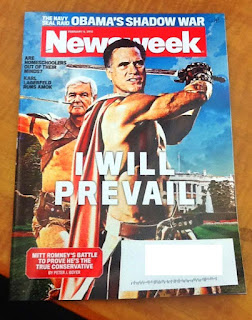 From what I've seen, this cover as largely met with ridicule, and I suspect that this is a case where it is better to imagine the politician as a gladiator, than to actually see him dressed/photoshopped up like one. Still further comparisons have been drawn between this spring's campaigning and the arena. The debate audiences have even been compared (here and here at 10:36:25) to the unruly spectators at the Colosseum at the CNN debates in January.

The issue of politics and the arena is a topic that I will return to in the future. In fact, there's a lot of interesting stuff to think about in 's Pro Sestio. Gladiatorial games were as much about politics as they were about sporting spectacles. It seems that we have returned to that political idiom again and it will be interesting to see how it recurs as the campaign season continues. We already have images of bruised and battered politicians, as if they have been fighting it out hand to hand (see here).
I had never heard the comparison of a modern political to a gladiator made until the 2008 presidential campaign. Were there earlier comparisons in American politics? Please send them my way if you know of any.
Posted by A.M. Christensen at 9:49 PM