I've been away from this blog for too long and hope to begin regular posts this spring. Think of it as a sort of second coming. To ease me back into things, the Colosseum has conveniently been in the news this weekend for two different reasons: 1) Passover and 2) protests by the "gladiators" who pose for pricy pics with tourists.

In 1749 Pope Benedict XIV (1740-1758) declared the Colosseum sacred ground and had a cross erected in the center of the arena and a series of fourteen crosses to mark the stages of the Passion of Christ around the perimeter of the arena. The crosses stood in the arena for a a century and a quarter, until they were taken down prior to excavation of the arena began in 1874. The Popes, however, have continued to mark the beginning of Passover with a procession to the Colosseum, often referred to as the "Via Crucis" or the "Way of the Cross." 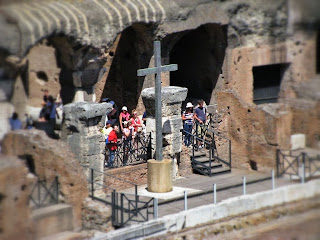 Cross on the south side of the Colosseum arena ~photo by author
Anyone who has been to Rome, has has almost certainly seen, if not been acosted by the "gladiators" who hire themselves out for tourist photos at the Colosseum and other major tourist venues such as the Trevi Fountain. In reality, most of the ones I have encountered seem to be costumed in military garb of some sort, rather than gladiator outfits.  Last August, a number of these "gladiators" were arrested in an undercover sting, after it was revealed to the police that they were working as an organized and illegal gang to bilk tourists out of their euros. This past week the City of Rome issued notice that the "gladiators" would be prohibited from plying their trade at the Colosseum as of April 6th.  They can, however, continue to line the streets leading up to the Colosseum and work in the vicinity of other tourist attractions; other, licensed vendors, were also asked to move away from the Colosseum.  (The rogueclassicist has conveniently collected the pertinent news stories over at Rogueclassicism.)

It is interesting that this ban on "gladiators" at the Colosseum is happening now. As already mentioned, it may have something to do with last years arrests, but another possible reason for their removal may be tied to the conservation work that is just beginning on the Colosseum. Albert Prieto has written up "What's Wrong with the Colosseum" in a two part post over at the American Institute for Roman Culture (see here and here). 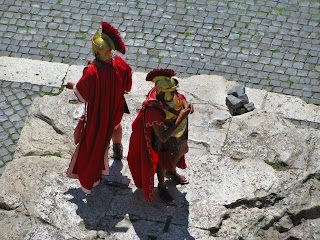 "Gladiators" at the ready outside the Colosseum ~photo by author
On Saturday, April 7th, a number of "gladiators" protested the ban by climbing the Colosseum and displaying banners supporting their cause. The banner I find most interesting is one that reads "30 famiglie romane da oggi senza pane. Diritto al lavoro." (30 Roman families are without bread today. Right to work.). Although probably unintentional, it reminds me of Juvenal's panem et circensem or "bread and circuses." Juvenal, in his tenth satire, is commenting on what gets the attention of the people in the first century B.C.E.; only free food and entertainment does the job. (For photos of the "gladiators" holding the Colosseum check out the series at La Reppublica).
Posted by A.M. Christensen at 12:35 AM

Email ThisBlogThis!Share to TwitterShare to FacebookShare to Pinterest
Labels: "gladiators", Passover, Via Crucis